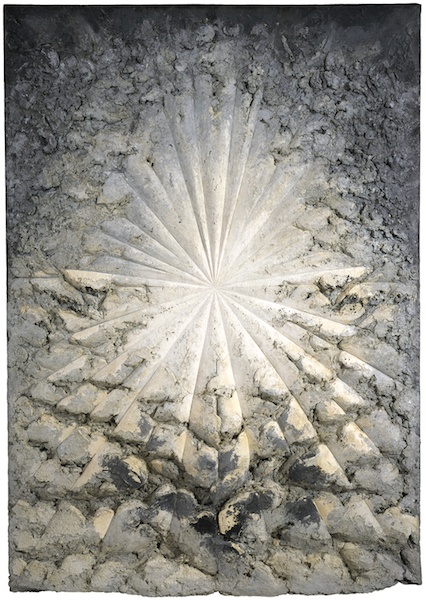 Collection of the Whitney Museum of American Art

Rarely is an artist so closely associated with a single work as is Jay DeFeo with her monumental painting The Rose. Begun in the late 1950s, when DeFeo, a central figure of the Beat generation of San Francisco, was just starting to garner widespread national recognition, the visionary work occupied the artist for eight years. Massive in scale, layered with nearly two thousand pounds of paint, the overpowering painting was already famous before its first exhibition in 1969 at the Pasadena Art Museum. It was next exhibited in San Francisco, then stored at the San Francisco Art Institute, where it languished for twenty-five years before a historic conservation restored it to public view. The Rose now resides in the collection of the Whitney Museum of American Art.

The Rose is currently on view at the Whitney Museum of American Art.

All quotations used in this section are from:

For additional information about The Rose, its creation and conservation, please read “Jay DeFeo and The Rose.” 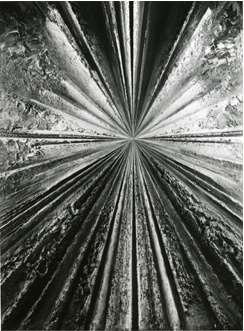 “…when I started The Rose, I had no notion of the rose about it. The title came later. It was just a painting. And all I knew about it was that it was going to have a center. When I started, it wasn’t a symmetrical thing. It was off-center.” 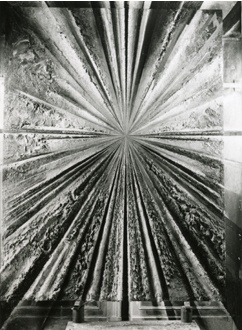 “After six months of working on the thing, I decided that the canvas should be symmetrical and it wasn’t really the right proportions.”

Jay DeFeo
Deathrose (early version of The Rose)
Elevated on paint cans with planned extensions painted on the surrounding walls. 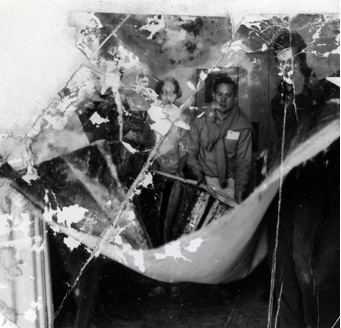 “With the help of Bruce Conner and Wally [Hedrick] and a couple of other good buddies, we transferred the original canvas and glued it on to a larger format – the format that it’s on presently. So the format started expanding beyond the original sized canvas. That’s when it really started going in earnest.”

Deathrose being removed from its original stretcher bars and preparing for gluing to larger canvas, 1959-60. Left to right: Jean Conner (with glasses), Craig Kauffman, unidentified man. In a 1972 note to Bruce Conner, DeFeo wrote, “This little collector’s item barely survived the 3 winters of mildew in my Ross barn.” 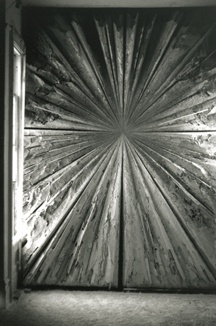 “It went through, I would suggest, a lifespan, a chronology of different stages…Anyway, I’d say there was that first beginning stage. And then there was a very geometric stage…It was actually kind of a crystalline sort of thing…There are no curved forms whatsoever. It’s very, very geometric.” 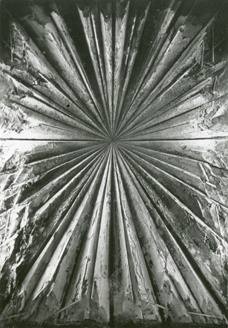 “There were even sticks introduced to support it in a very geometric way. But then that didn’t seem to satisfy me, although that did seem a complete stage in itself. It held up visually as another version of the concept.” 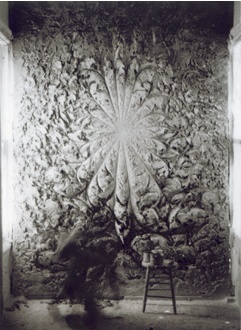 Then it started getting much more organic in character, which pleased me. Although the structure of the thing remained in the final version, I started the interweaving of organic shapes…It went into a super-baroque period..I wasn’t really aware of how flamboyant it had become…I felt that it really needed to be pulled back to something more classic in character.” 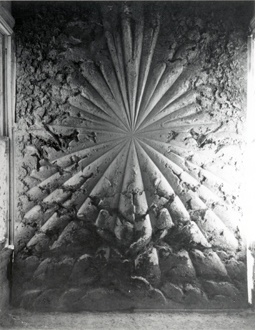 “I felt that it needed a little more clarity, not only in the linear way, but in the relationship of the textures. I wanted more smoother areas in contrast to some of the rough edges that occurred. It always has troubled me, but I think I was pretty lucky to have been able to stay on long enough in that studio in order to get to that stage of the game. So it was practically as good as finished when we got evicted.” 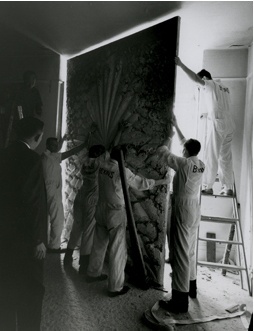 “So we spent a month of backbreaking labor moving…The last to go was The Rose…The first people we had contact with was Bekins…They made several trips to the studio that week. They sized it up and thought of all the possibilities and the best possible way of handling this. It had to be wedged out of a very tight window out in the front with no leeway whatsoever.”

The Rose as the Bekins crew moves it away from the bay window at 2322 Fillmore Street, November 9, 1965. 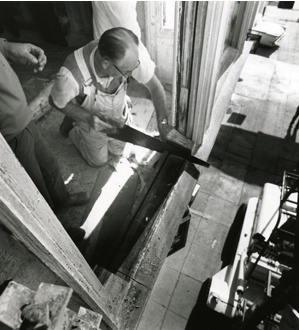 “Well, didn’t the wall actually have to be removed?”

“It sounds a little more dramatic than it actually was. It was about two feet below the window that had to be cut out so that the painting could be moved in front. All this was done in the space of an afternoon. The painting was eased out.”

Sawing through the window frame and wall at 2322 Fillmore Street to enlarge space for removal of The Rose. 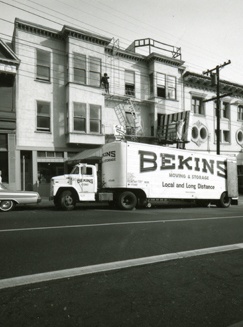 “Walter [Hopps] very much wanted it for the Pasadena Museum…So the idea was at the time that I would go with the painting to Pasadena and stay down there for a brief period of time and attempt to put on the final details…They gave me a little room directly to the right of the entrance…and my own special key to the museum. They were really terrific to me. But all these turpentine fumes would come wafting out into the museum proper and then there was the expense of me being there and the weekly journey back to San Francisco, so that I could maintain the class I was teaching at the Art Institute. This went on for three months.”

The Rose, packed and crated, is removed through the enlarged front window and lowered by forklift, while Jay DeFeo looks on from the fire escape above. 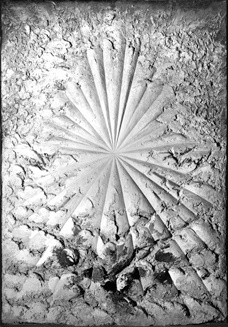 The original intention was for Walter [Hopps] to show the painting down there…But when he left, it just sort of stayed on in that little room and nothing was done about it. The painting just sat there until about 1968, and it was during this period that they were going to move the museum…They wanted to have a showing of The Rose before they moved.”

The completed Rose. This photograph appeared in the brochure published by the Pasadena Museum when it exhibited the painting in 1969. Until its conservation in 1995, The Rose was primarily represented by this black-and-white photograph.

“In the painting of The Rose I had the feeling that that painting kind of reached everybody on some level or another. There wasn’t a person that came into that studio when I was working on the painting, whether it was an artist, a layman, or a painter or whatever, that didn’t respond to it on some subjective level…Everybody seemed to know what it meant for them and it seemed to transcend a verbal explanation.”

Gift of the Jay DeFeo Trust and purchase, with funds from the Contemporary Painting and Sculpture Committee and the Judith Rothschild Foundation.