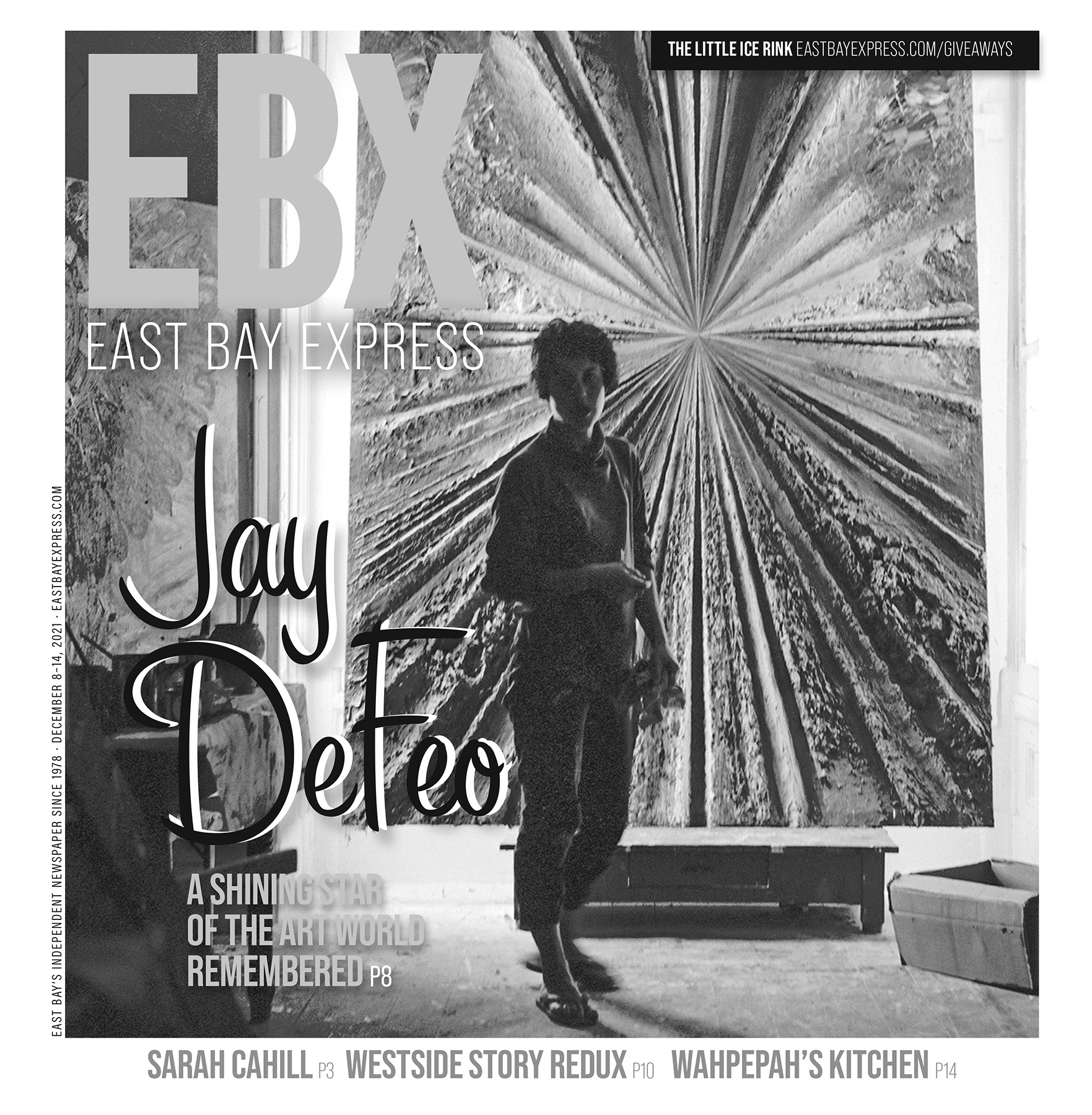 Couched on the surreal sofa of Bitcoin—digital currency that isn’t actually cash—and a contemporary art scene that introduced NFTs—non-fungible tokens that render artwork, videos and music into unique, “one-of-a-kind” bits of digital data that are not 2D, 3D or in any way tangible—the work of artist Jay DeFeo (1929–89) seems infinitely paradoxical, even fantastical. The Bay Area artist once labored almost exclusively for eight years on The Rose, an epic, 2,000-pound painting so massive its extraction required a Bekins Moving Company team to saw an opening in the bay window of the artist’s San Francisco apartment in which it was created.

A day later and on the cusp of being evicted, DeFeo ripped from the wall her Estocada, a large-scale painting on paper that was stapled directly to a hallway wall in her tiny home studio. The artwork came off in ragged-edged chunks which she saved and years later repurposed and reinvigorated through photography, photocopy, collage and relief.

Three of the Estocada shards are now housed as a triptych held in the collection of the Fine Arts Museum of San Francisco; other bits and pieces reside in the custody of the artist’s foundation in Berkeley. The Rose followed a no-less-spectacular odyssey of its own. Shipped to the Pasadena Art Museum, the enormous 11-foot-tall, grayscale painting made its debut before returning to make a well-received Bay Area appearance at the San Francisco Museum of Art—later the San Francisco Museum of Modern Art.

Eventually hung on a wall of the MacMillan Conference Room in the San Francisco Art Institute, a particle-board wall was erected in 1979 to provide additional exhibition space for SFAI students’ work. DeFeo’s opus-worthy painting lay almost entirely hidden behind the wall, destined to be forgotten. The Whitney Museum financed a restoration in 1995, years after DeFeo, at the age of 60, succumbed to cancer in 1989. The Rose’s astonishing journey from its origins at 2322 Fillmore Street to the Pasadena Art Museum is forever immortalized in fellow artist Bruce Conner’s 1967 film, The White Rose.

The trauma of feverishly immersing herself in single works of art such as The Rose took a serious toll on DeFeo. Her artwork and artistic pursuits even to this day defy categorization as Abstract Art or Abstract Expressionism—nor is her work boxed in by the materials and multiple mediums she used that include paint, found and created paper, photos, photograms, photocopies, collage, glues and resins, drawing and painting tools, and more. Her art spun through wildly eclectic subject matter sparked by impossible-to-predict origins such as her abandoned dental bridge, bull fighting, clustered lines resembling human hair, the female form and Italian architecture, to name a few.